The Eskimo dog, called Qimuttoq by the Greenlanders, is one of the most misunderstood of all the great explorers. He arrived in Greenland from distant Siberia nearly 1,000 years ago, pulling heavy sleds with migrants and their belongings, a dangerous journey few could repeat today.

The ancestors of modern Greenlanders gained their independence and ability to travel primarily through the two groundbreaking discoveries. The first was seal oil and the second was dog sledding. Both gave them the freedom to travel through the drifting pack ice indefinitely, even during long months of total darkness.

Seal oil and Qimuttoq explain how Arctic people thrived in the harshest climate on earth. These former migrants did not depend on timber or government subsidies. They only relied on their dogs. This is why the ancient Eskimos saw themselves as one being – with their dogs, their tools, nature and the climate.

“Today we call ourselves Inuit because we are no longer independent,” says Inuit elder Ole Jorgen Hammeken, a prominent Greenlandic explorer, dog sledder and actor. He played the lead role in the Greenlandic film INUK, which depicts the rapid decline of Greenlandic dog sledding culture.

“Now we are dependent on oil, gas, silver and all the other modern essentials,” he says. “We have lost our knowledge and we are paying the price.”

In 2007, as part of the International Polar Year, Hammeken led the Global Warming Dogsledding Expedition to find a new route between the towns of Uummannaq and Ilulissat in West Greenland instead of the traditional dog sledding route through Disko Bay, which no longer freezes in winter. . “Thanks to the dogs, we were able to find the missing link,” says Hammeken.

The qimuttut (dogs) of Avanersuaq, also known as the Thule District, were essential to many 19th century Arctic explorers – Kane, Hayes, Hall, Peary, Cook. They were also the first to travel to the South Pole in 1911.

But even before that, around 4,000 years ago, the Qimuttut were the first to reach the end of the world – Nunarsuup Isua Aka, the northern tip of Greenland.

Today, the Qimuttut are the only thing left of a once rich culture. When Christian missionaries arrived in Greenland in the early 1700s, they banished all traditional ceremonial life. Drum dancing, communal living, and spiritual beliefs in giants, dwarfs, and demi-humans were banned. Only the dogs remained. This is why the people of Avanersuaq cling so fiercely to their dogs. The dogs are their only hope of preserving the unique culture which is rapidly disappearing with the disintegrating ice. 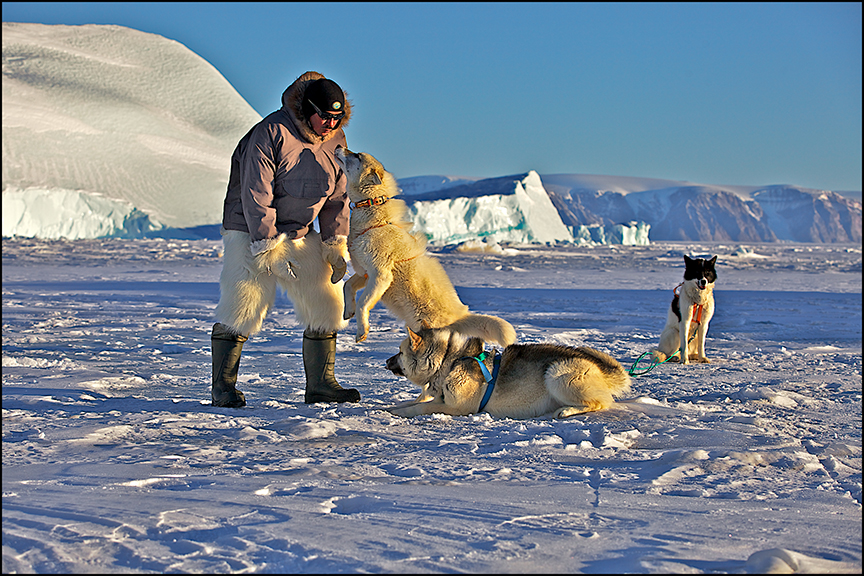 Today, 800 people and as many dogs live in Avanersuaq. The region is only 1,000 km south of the North Pole and is the only place in the world where the dog sledding culture lives. Here, people still wear skins and hunt with spears. Dog sleds are the only means of transport, with small boats open in the summer. Helicopters and fixed-wing aircraft are available, but they are prohibitively expensive.

Thule has banned snowmobiles except for fishing in Qeqertat. Fishing, traditionally frowned upon as a poor second to hunting, is on the rise due to climate change. Qaanaaq residents say they noticed a sharp drop in animal life once snowmobiles were allowed further south in Greenland, in towns like Uummannaq. That’s why they chose to stick to tradition.

“A snowmobile is fast, but it has no brains,” says Rasmus Avike, one of Qaanaaq’s most experienced subsistence hunters. “He has no eyes, he has no ears. Dogs can smell dangerous ice and open water and move in zigzags, but snowmobiles just keep going, often heading for disaster.

The Qimuttut are the descendants of the first canine migrants who arrived in Greenland from Siberia via what is now the Canadian High Arctic. To keep the lineage pure, no one can introduce other breeds to North Greenland. To avoid disease, if a Greenlandic dog crosses the Arctic Circle to the south, it is not allowed to return. 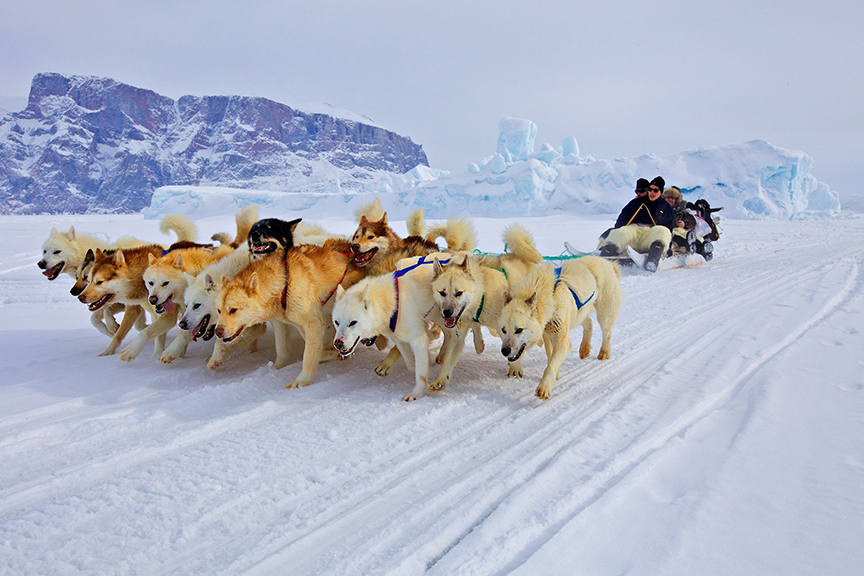 The dogs are strong but they were even stronger before. Photo: Galya Morrell

Even some very experienced explorers do not know this law.

In 2013, my Inuit husband and I were in rural Siberia when we received an emergency call in the middle of the night. Russian explorer Fyodor Konyukhov had dog sled to Greenland from the North Pole and now hoped to cross the island from north to south in record time. His expedition sponsor, Dr. Arthur Chilingarov, needed our help.

Konyukhov was not allowed to enter Greenland, or rather his Karelian Russian breed dogs could not. Konyukhov had no idea why. Chilingarov, also known as the Russian Arctic Czar, asked us to contact the Greenlandic government and try to solve the problem.

We had very little cell coverage in our small Yakutian village, but we managed to make a call from the local mayor’s office. As expected, the response was: “No, it’s the law!” No exceptions, even for celebrities or good causes.

The elderly people of Avanersuaq still remember that in the early winter of 1988 almost all the sled dogs in North Greenland died from an outbreak of distemper. The virus had apparently come from Canada and then spread rapidly through the colonies. Eighty percent of the dogs died or had to be killed. It was a national tragedy. Today, vaccinations are done regularly, but people believe more in isolation than in vaccination. 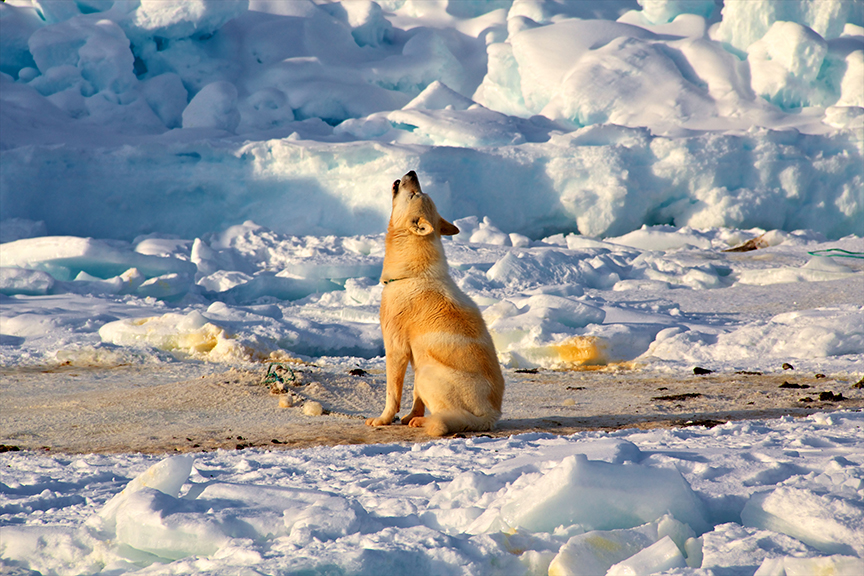 A Qimuttoq is smart, heavy and strong. A team can pull not just one sled, but a train of them. These trains often include a small boat, a kayak and, later, an extremely heavy catch such as a narwhal, walrus or polar bear.

“Traditionally, the Eskimos only used four or five dogs per family,” says Hammeken. “It’s because in the past, dogs were much stronger and could pull a very heavy sled. They roamed freely, had their hierarchy and had good natural food. But with the advent of Danish dog food, dogs became more susceptible to disease and weaker in general. Now hunters sometimes need up to 20 dogs to pull the same sled.

Qimuttut are normally only fed every two or three days in the summer. They must stay hungry so as not to lose their survival instinct during these long journeys where the hunt goes wrong. Even on hungry days, the dogs must continue to pull the sled. But when the hunter catches his catch, he feeds his dogs before him. Qimuttut can easily swallow whole fish or medium-sized pieces of whale or seal. 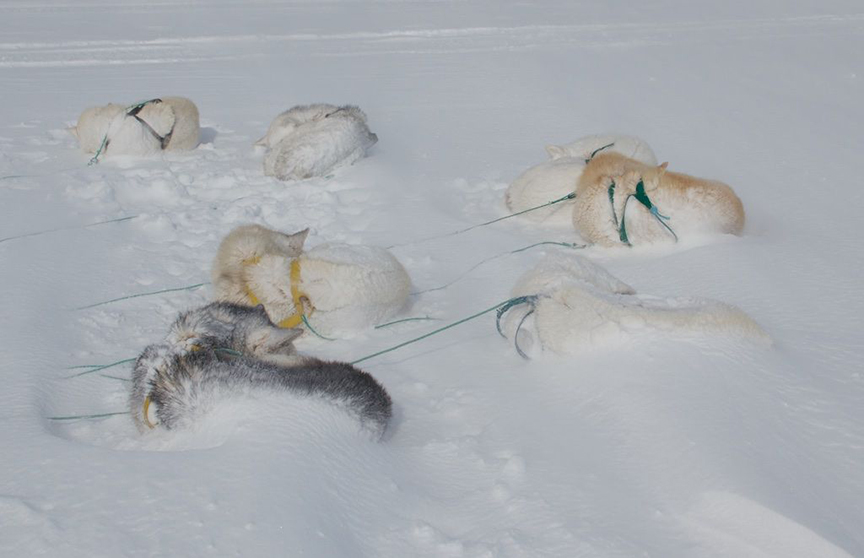 Their double fur protects them from the cold

Greenlandic dogs sleep outside. Their double fur even protects them from extreme cold. Often in the morning, after the snowstorm, we don’t see them at all. They are buried under a thick layer of fresh snow. At dawn and dusk, they howl in unison, and there is nothing more charming than this arctic chorus, heard miles away.

Qimuttut can be as fierce as wolves. They recognize and obey the owner who feeds them. But stay away from these dogs if you don’t know them well! They can easily bite your hand if something is lost in translation. 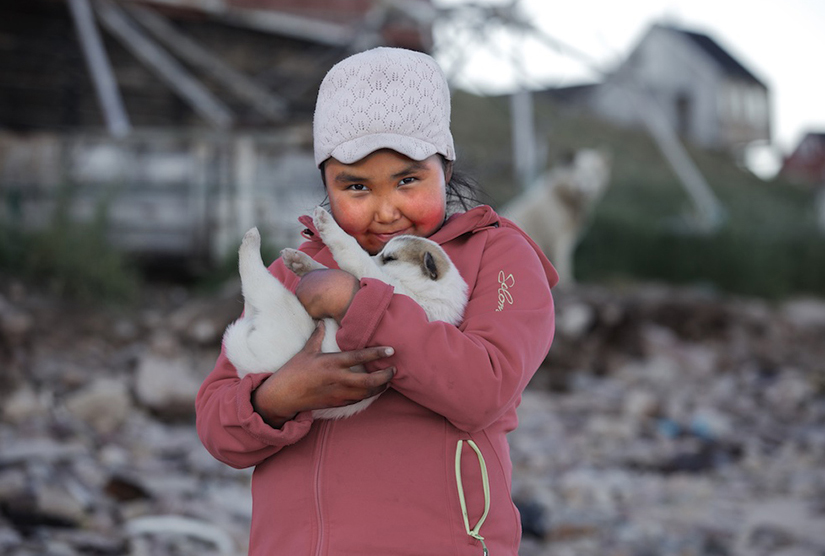 And yes, they can aim for more than just a hand. Inuit children are generally knowledgeable enough not to fall victim to a Qimuttoq. They know the rules, and even at a very young age they understand animal body language. But when young children come from the south, especially from big cities, accompanied by their parents, the situation can quickly deteriorate.

They are not pets

A few years ago, a tragedy occurred when a Danish child was eaten by Qimuttut. Soon after, a law was passed prohibiting dogs from roaming the settlements freely as they had for millennia. If a rampaging dog is spotted, the “man-killer” is called and the dog is put down within minutes.

Because of this law, dogs are chained most of the year to rocks or ice. Sometimes they can stay chained for nine months. They become depressed. By the time the pack ice arrives, their memory of hierarchy is lost. The process must start from the beginning. It may take weeks of fierce fighting before order is restored. Then the travel season can finally begin. 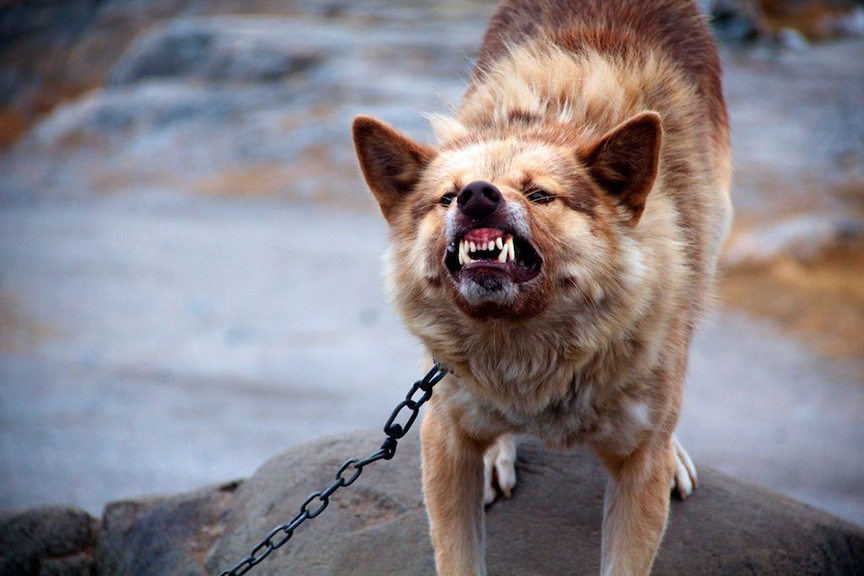 A working dog, not a pet. Photo: Galya Morrell

There was a time when Qimuttut were part of sacred rituals. They were guardians of home and family, protecting the intimate relationship between dogs and humans. In Kalaallit (Inuit of Greenland) tales, women usually married dogs and gave birth to entities with superpowers. Meanwhile, a white man – a Qallunaaq – was believed to be the product of a pregnant Eskimo woman from Kalaallit Qimuttoq.

Today, not only the tales, but also the Kalaallit Qimuttut themselves are on the brink of extinction. The Qimuttut always have priority on small roads inside settlements. Special road signs remind strangers that dogs have right of way, but their future remains bleak. Over the past 20 years, Greenland’s sled dog population has fallen from 31,000 dogs to less than 15,000 today. 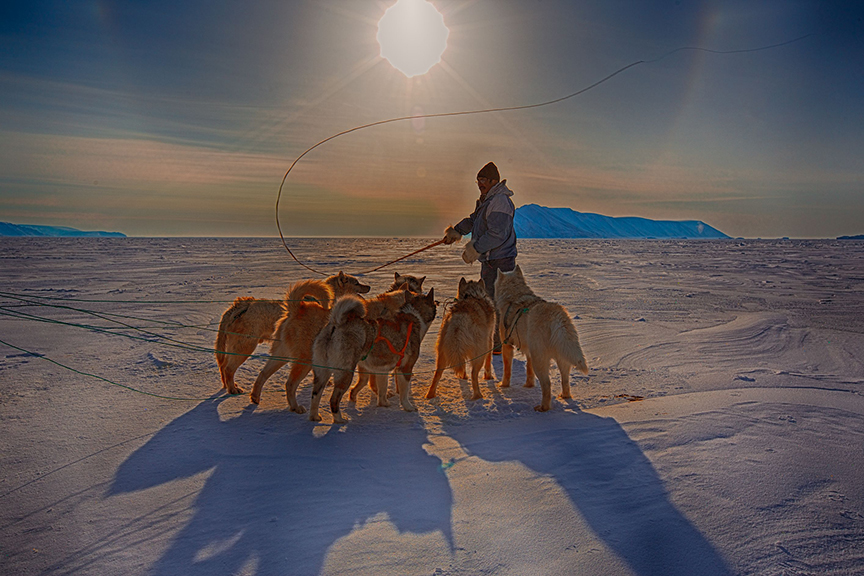 Climate change and westernization jeopardize the future of the Qimuttoq. In most other areas where the dog sledding culture once thrived, from Chukotka to Nunavut, it now exists only as a souvenir, tourist attraction or sport.

Thule people don’t like to talk about bad things. If asked, they will draw on ancient Inuit attitudes and say, “That too will pass.

Recently, the Greenlandic government started a few projects to save the dog sledding culture. One of them, Qimmeq – The Greenlandic Sled Dog, is a large multidisciplinary scientific panorama on the culture of the sled dog and the genetic origins of the sled dog. A joint effort of the University of Greenland, the Natural History Museum of Denmark and the University of Copenhagen, it aims to start a common conversation about Inuit cultural identity. This can help maintain a viable sled dog culture for future generations. 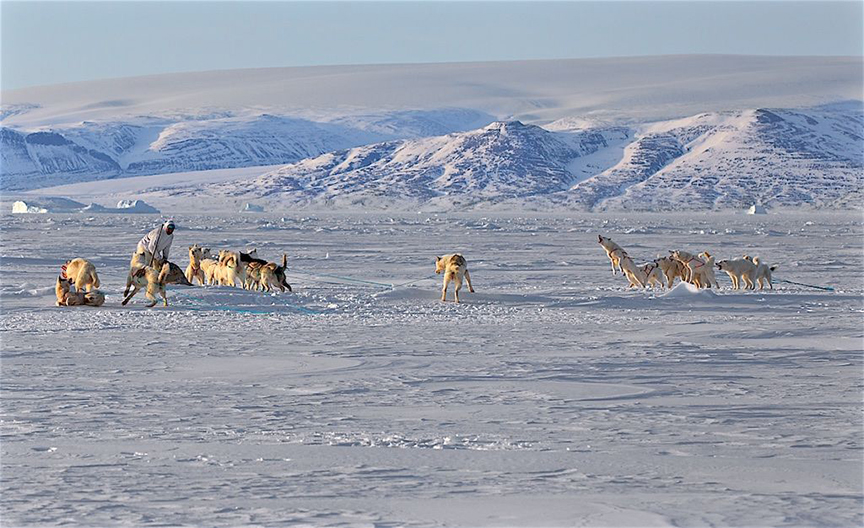 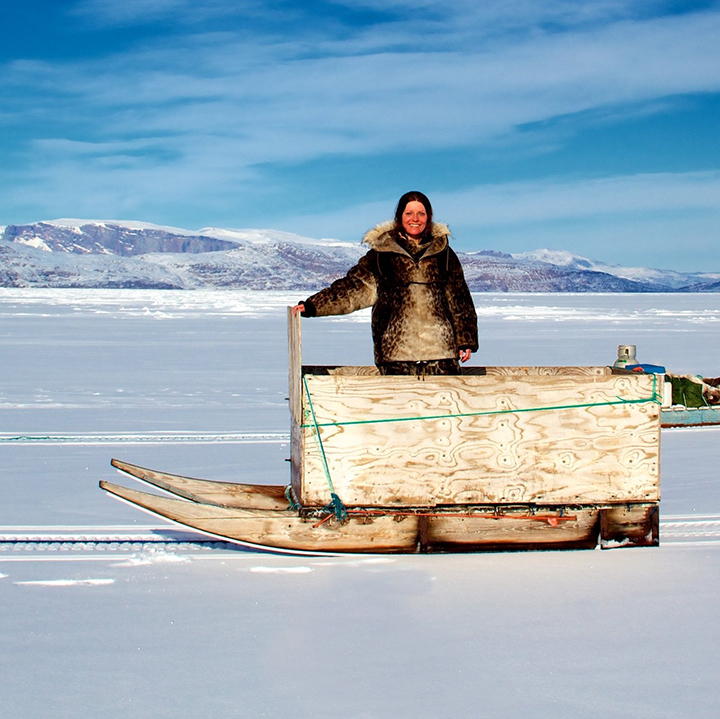 Visual artist Galya Morrell has lived and traveled in the Arctic for over 30 years. Under the stage name ColdArtist, Galya explores the limits of the body and the possibilities of the mind, working in a rare genre of visual synthetic performance on the drifting ice floe. Along with Greenlandic explorer and polar actor Ole Jorgen Hammeken, Galya has founded numerous cultural initiatives focusing on the circumpolar regions.